Ending the Toliet Paper Embargo of 1987: Treating People With the Respect They Deserve 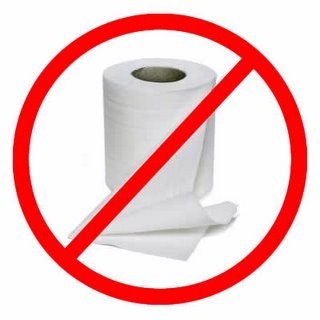 I lived in the dorm during my first year at The University of Michigan.  It wasn't so new to me since I had started college the previous summer just after high school.  During that summer semester I lived in West Quad, and had a pretty decent introduction to college life and communal living.  I also had the privilege of having an older brother and sister who both attend U of M and lived in the same dorms.

College dorm living is an experience all in its own, especially if you choose to room "blind" and live with a total stranger that the University pairs you up with.  Back then, most universities didn't use personality dimensions to pair up compatible roommates, and from the look of things, didn't really pair up people with any semblance of consideration at all.  Not only do you have to learn to live with someone that you normally wouldn't be friends with or hang out with otherwise, you also share a hallway and in my case, a communal bathroom with another fifty or so strangers.

Fortunately, the residence halls have custodians that are responsible for the hallways and bathrooms being kept clean, or it would certainly be an animal house.  Our custodian was an older woman, who had been working for the University for over thirty years.  Its even conceivable that she might have worked at East Quad where my parents met thirty years prior.  But for all intents and purposes of this article, she was working at Mary Markley, 6th Fisher to be exact, and she had to unsavory opportunity of having to deal with the guys on my hall.  Now, U of M attracts students from all over the world let alone all over the US and all over Michigan.  It would be lazy and generalizing to say that the guys from out East (New York , New Jersey) were to blame, but I knew some of the guys on my hall from my own high school and a few from neighboring schools, and they were just as bad as the worst from out-of-state. 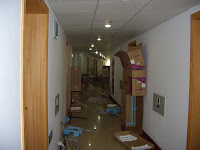 It didn't take long for the bathrooms to get littered with toilet paper, or stray pieces of clothing, nor did it take long for the empty pizza boxes to fill the halls.  Normally, she would start early in the morning to vacuum the hallway.  I was always an early riser with early classes so I was up and about when she would vacuum around 7am.  If guys left the pizza boxes in the hallway, she could tell which room they were from because the pizza shops would write the phone numbers on the box, and they corresponded with the room numbers.  It wasn't unusual for her to ram the vacuum into the offenders' doors with a loud bang.   It was a novel release of frustration, but it didn't help the increased the workload of our custodian.  It wasprobably nothing that she hadn't already seen before, that is, before the poster.

During a weekend, in the 2nd semester, someone had made a terrible mess in one of the stalls, the details of which aren't important so I will leave it up to your imagination . . . . .oh well, it was Dookie, all over the toilet and floor.  It was disgusting and obviously the result of someone getting way too drunk, and being completely unable to behave like a human being.  The custodian wrote on a large poster board a note about how disgusted she was with peoples behavior and messiness in general, the disgust of course was precipitated by the mess of excrement on the bathroom floor.  Unfortunately, the poster was written with poor grammar and spelling, and was quickly annotated with graffiti comments and jeers towards the custodian, culminating in downright cruelty and ridicule.

Subsequently, within a day and a half, the toilet paper in the stalls had run out and the custodian was no longer adding rolls daily.  A couple of us went to the Resident Advisor (RA) on the hall, and in his useless fashion was unable to find out why this was happening or when toilet paper would be returning to our midst.  In the meantime, we all had to secure our own supply either from the market or other floors of the dorm, so that we would have what we needed, when we needed it .  This went on for several weeks, and eventually the residence staff informed us that the custodian was not going to furnish toilet paper until the communal areas were kept cleaner by the students.

Now, as a Freshman, I was fortunate to have a car up at school.  I was even more blessed to have a place to park it, since my parents owned an apartment building on the south side of campus.  A few weeks into the custodially imposed embargo, I had to take my car to a muffler shop to have the muffler and tailpipe replaced.  I took it to a shop in  nearby Ypsilanti, and took the municipal bus back to the dorm.  Ann Arbor has had an excellent bus system for years, and it allows for timely travel between Ypsilanti, Ann Arbor and the surrounding areas.  Two days later it was time to pick up my car, so I took the same route back to the shop in Ypsilanti.  While I was on the 25 minute bus ride, I noticed that our custodian was riding the same bus, so I sat down on the seat next to her.

I introduced myself as a resident on her floor, which instantly caused her to tense up, just a little.  I quickly apologized that the guys on the hall ridiculed her poster, and assured her that they were a minority.  We continued to talk for about fifteen minutes or so about her experience with the university, and the issues she had experienced in her 30 years.   I knew I had to get off the bus soon, so I asked her very nicely, if it was possible for her to start putting the toilet paper back in the stalls.  It took some convincing, she was quite jaded by the crass treatment from the residents that adultered her request for decency.  In order to seal the deal to end the embargo, I furnished her with the room numbers of the most obnoxious guys on the hall responsible for the unsavory comments, two of which I disliked anyway so selling them out wasn't any problem.  I am not sure what she did with that information, but it was inconsequential, because they deserved whatever they received.

Sure enough, the next day, every stall was stocked with toilet paper, and everything continued quite well for the remaining two months of the semester.  I didn't tell too many people about the negotiation or the historical end to the embargo.  I have however told this story to my kids, along with their cousins who are attending school and staying in the dorms.  I wanted them to realize that custodians in buildings, maids in  hotels/motels, etc. are people with families, joys, problems, but most of all humility and self respect.  I tell them not to stand by while others denigrate them or make their jobs harder than they should be.  These aren't high paying jobs, and it is difficult to clean up after strangers, many of which treat you like an undesirable.  Most of the time, it is a few bad actors that encourage others to join in mob-effect type behavior.  What these service employees need is a good hearted advocate to put a stop to the nastiness before it gets out of hand.

Every job has its good times and bad.  Some peoples' bad is worse than others.  For whatever reasons they stay in those jobs, doesn't justify mistreating or ridiculing them.  Sometimes picking up a piece of trash, that isn't yours, and throwing it away is the descent act that a service person notices.  It just might make their day a little better, and allow them to feel just that much more human.