February 02, 2011
Last year, my younger son had an unusual idea for a school costume party.  He wanted a tall box that he could wear over himself, with nothing more than a slit to look through.  Luckily, we had just finished moving, and there was a spare wardrobe box that fit the bill.  After he cut the sight slit in the front, he simply wrote "COSTUME FAIL" on the box with a Sharpie, and that was it.  I didn't get it.  He did, because he won the contest at the school party.  Evidently, this new generation uses the term FAIL to signify a discontinuity, a goof, or an abrupt interruption in the normal scheme of things.  To me, it looked like a silly idea at first, but that was because I simply didn't understand the youth culture growing up around me. 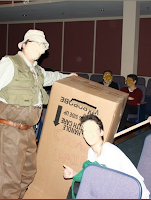 When I started working in "Big Steel", I was amazed at the size of everything, and the spectrum of people that worked there.  I quickly realized the tension that existed in a unionized work place.  From the first day as a "Management Associate", I was easily dismissed as another "Boss in Training".  As exciting as it was to watch steel being made, it was equally daunting learning to fit in to this highly charged and adversarial work atmosphere.  I was still living with my parents at the time, and when I would come home from work, I felt more like a prison guard trainee than a mechanical engineer.
My father, who had worked for an industrial  equipment supplier earlier in his career, had quite a bit of experience with this type of work and lent me this advice,  "If a company has become unionized, it is because of a failure of managment to treat their employees fairly at one point or another."  It does sound simple enough, yet the industry that I have worked in during my career has had a horrible history of labor/management conflict from its inception in the 1800's starting with its architect Andrew Carnegie.

Throughout the first 10 years of my career, working for a 80 year old integrated steel plant, I certainly witnessed the dark-side of management.  I was involved with employee discipline, hirings, firings, and contract negotation posturing.  As a maintenance general foreman, I tried to establish a local sense of trust within the group to help us work through the issues of delivering the same level of work while experiencing steady attrition through retirement.  The labor/management rules in place made it difficult to use contractors, while dealing with a contracting workforce whose average age grew with each year.  I found myself spending half of my day working on ways to work around the inflexible work rules and the maze of contracting-out restrictions.  Meanwhile I was feeding into the machine that bred the mistrust between management and the workforce.

I spent countless hours, which will be reflected in countless blog entries working through these mindless disputes dealing with overtime board violations, work rules, contractors, you name it.  In the end I realized that the basic core of the issue was trust, and the absence of trust created a chasm so wide that it couldn't be bridged with the players on the field.  They were so involved with fighting everything, they just didn't see what was really going on.

At the start of the new century I made a bold decision to leave my employer for an opportunity with a new company in the new domestic steel industry.  The new company was one that I had been watching for seven years prior throughout its startup, ramp-up, and quick rise to profitability.  The basic model was taken from a direct competitor that has proven over a 40+ year history that if you expect excellence from your employees, and in turn reward them for excellence you will gain their enthusiasm.  If you do what you say, you will gain their respect.  If you include them in the decision making they will become part of your process.

Some years after I left my first employer, and former co-worker and I were discussing what could be done to fix the broken system of labor relations in the "Old" steel industry.  I told him that the attitudes of the work-force and management lacked any cohesive trust in one another.  There was too much animosity and history of betrayal for it to ever work without a major change.  This change could not be undertaken without a major shift in vision, attitude, and approach.  The way each side despised each other made it impossible for either of them to "get it".

I went to my son's party at school, and I saw all the other children with their store bought costumes.  Some were dressed up like cartoon ,story book, and even movie characters. Many of these costumes were put together by their parents.  I looked at my son's costume, made with his own hands, and the way all of his friends at school thought it was so original, so cool and clever . . . I got it.